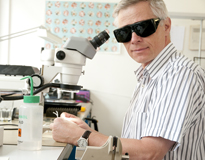 Fin Bomholt was born in 1954 and received his MS in Electrical Engineering from the Swiss Federal Institute of Technology (ETH), Zurich in 1978.

Fin worked in the R&D department of a Swiss defence company, designing analog and digital electronics, test equipment, and procedures for repair of radar receivers and high-power transmitters, and he led a group of hardware design engineers. He obtained further expertise in various other areas, including satellite-born ion spectrometers / high voltage deflection systems, test and training simulators and concepts, software and algorithms for real-time intelligent triangulation systems, and system EMC and EMP design and testing. His interest in EMC led him to pursue his PhD in computational electromagnetics at the ETH Zurich in 1992. Since 1995, he has headed the radar R&D and has developed, evaluated, and tested radar synthesizer subsystems and systems.

In 2001, Fin joined SPEAG as head of R&D, focusing on systems and hardware, and as deputy laboratory director on their calibration. His areas of special interest are measurement and development of dielectric materials and hearing aid compatibility.