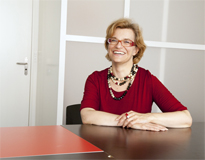 Director of Finance and Administration

Jacqueline C. Pieper finished her commercial apprenticeship in 1984 and received her BBA (eidg. dipl. Kauffrau HKG) in 1994. In 2008, she finished her MAS in Controlling. Jacqueline worked for a total of 15 years with several major Swiss banks, 8 years of which as project manager leading various organizational and IT-related projects. For another 3 years, Jacqueline then helped two start-up companies with the organization of their administration and accounting systems. In 2000, she joined SPEAG as Head of Finance and Administration.