With the increasing demands for wireless devices to operate using a wide range of protocols over a growing number of frequencies, faster specific absorption rate (SAR) testing systems have become very popular. Even more importantly, reliable SAR magnitude measurements for quality assurance (QA) are in high demand. To tackle these issues, Part 3 of the IEC standard 62209 is currently being developed which will allow the use of standardized fixed sensor array systems in addition to robot-based scanning systems. Though the final standard is being delayed due to the complexity of the subject, discussions have progressed to the point where a DPAS (Draft Publicly Available Specification) has been submitted for IEC approval. This DPAS will give the SAR testing community additional confidence in the new methodology.

As a world leader in the field of SAR testing, SPEAG recognised the need for faster ways of obtaining wireless SAR product approval already at an early stage. With cSAR3D, we have developed the most accurate and repeatable vector measurement-based SAR test system using a fixed sensor array. As array systems are black box systems from the perspective of validation, rigorous and traceable calibration is critical for achieving accurate and repeatable measurements. To meet this requirement, SPEAG developed a full range of calibration tools and heavily invested in a 50 m2 ISO/IEC 17025 calibration facility to support this exciting new technology. 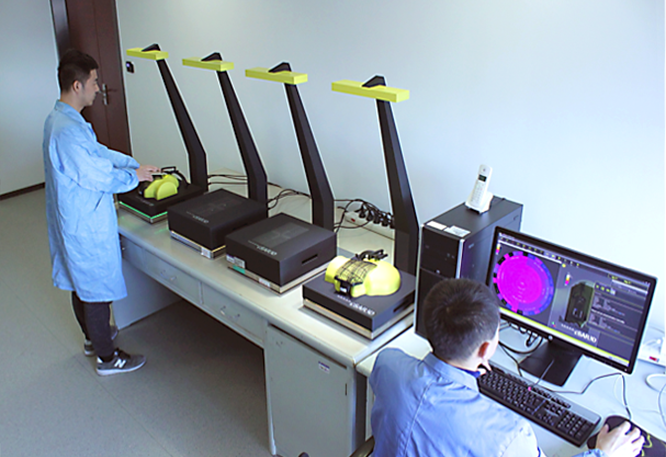 cSAR3D in use at CTTL China.

The final proof that a system complies with all requirements of the standard can only be achieved by validation. The design of a rigorous validation system that is embodied in the new standard has been developed with main contributions from the National Physics Laboratory (NPL) and the IT’IS Foundation.

To date, a number of vector measurement-based SAR test systems have become commercially available, most using probe arrays imbedded in a broadband tissue simulating gel. However, a recent large interlaboratory comparison of sensor array systems by a recognised independent SAR test laboratory has shown that some systems fail the validation requirements, with variations up to several dB (> 5 dB) from expected target values. These results clearly demonstrate the need for extensive validation, and may also be an indication that some system manufacturers are overly optimistic in their uncertainty assessments.

The same study concluded that all of SPEAG’s cSAR3D systems pass the validation requirements. It also confirmed an expanded uncertainty of less than 30% for a 95% confidence interval over the entire frequency range for the cSAR3D flat system and 34% for the head phantoms. The results corroborate not only that cSAR3D is the system of choice for QA, but also that the cSAR3D flat is currently the only fast SAR system meeting all the requirements of the new DPAS for absolute SAR testing.

Almost 200 cSAR3D units are in use worldwide for rapid SAR testing in R&D and QA applications. For compliance evaluation, dramatic time savings can be achieved when the cSAR3D is linked with the cDASY6 software to the SPEAG industry standard DASY6 compliant SAR testing system.