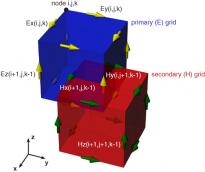 Primary and secondary cell within Yee grid in FDTD representing E- and H-field components in the discretized space. Each node i,j,k within the FDTD grid represents three electric and magnetic field components located around a volume element

The Finite-Difference Time-Domain (FDTD) method is based on a spatial and temporal discretization of Maxwell’s equations, commonly within a rectilinear cartesian grid originally proposed by Yee in 1966. Within the last two decades, FDTD gained rapidly increasing interest, mainly in electromagnetics (EM), for the simulation of complex and largely inhomogeneous structures due to its straightforward and explicit approach. As depicted in Fig. 1, approximately 4500 scientific papers related to FDTD have been published, mainly from the late 90s to the present (1999-2001: counts not complete). The exponentially increasing availability of computational power has made FDTD the most popular numerical method for a broad range of applications and has resulted in the release of several public and commercial FDTD-based simulation platforms.

By assuming a spatial environment without any electric or magnetic sources, the relations

enable a definition of the time dependent Maxwell’s curl equations in differential form as follows:

The FDTD algorithm proposed by Yee is based on a description of the temporarily coupled system as described in equations 2 and 3 on the basis of a finite central difference approximation. Fig. 2 depicts the position of the electric (yellow) and magnetic (green) field components for each primary and secondary Yee cell, respectively, allocated within the staggered cartesian grid. The fields are located in a way in which each E component is surrounded by four H components and vice versa, which leads to a spatially coupled system of field circulations corresponding to the law of Faraday and Ampere. Each three E- and H-field components are assigned to a node i, j, k within the three dimensional (3-D) FDTD grid.

The discretization in time for FDTD is performed in a leap frog manner by application of a temporally shifted updating for E- and H-field components as shown in Fig. 3. Thereby the electric components are calculated at incrementing time t = (n+l)Δt,  (l = 0, 1, 2, ...) with respect to a globally defined timestep Δt. The computation of the magnetic components in FDTD is performed at t = (n + l + 1/2)Δt, (l = 0, 1, 2, ...), i.e., shifted by half a timestep.

The original FDTD formulation proposed by Yee was intended for homogeneous, isotropic and lossless media on a uniform grid by application of a cartesian coordinate system. Achieving 2nd order accuracy using a 2nd order finite differences approximation for the differential equations 2 and 3 leads to

for time and space as shown for the x direction. The indices i, j, k indicate integer values specifying a certain node in the spatial FDTD grid and u n any temporal dependent function at the time nΔt, i.e., the electric or magnetic field. O[(Δt)2] and O[(Δt)2] indicate the spatial and temporal second order error terms.

The x component of the electric field within equation 3 is formulated for FDTD by the application of central differences as follows:

the algorithm can be expressed in a fully explicit form, i.e., equation 6 is written as 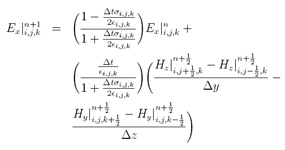 A detailed description of the entire FDTD updating equations for electric and magnetic field components is given in Allen Taflove’s standard FDTD book. In the time domain, the spatial and temporal updating scheme of the associated Finite-Integration Technique (FIT) is similar to the FDTD method, including stability and dispersion properties.

To guarantee numerical stability for the common FDTD approach, the upper limit of the timestep Δt must be bounded by a criterion which restricts an update cycle’s EM field propagation from cell to cell from being faster than allowed by the phase velocity vp = 1/√εμ within any material (ε, μ). A stability analysis for FDTD based on eigenmodes of the 3-D space was performed, while more recent publications apply a combination of alternative methods. The corresponding Courant-Friedrichs-Lewy criterion for the general Yee FDTD grid defines stability as

where Δx, Δy and Δz indicate the spatial cartesian grid increments. The minimum (min{ξ}) condition must include all cells within the entire computational domain in FDTD.

Although the common Yee FDTD method for non-dispersive, isotropic and lossless media is proven to be conditionally stable for algorithms introducing conformal modeling and special treatment of grid interfaces, as performed in subcell and subgridding schemes, respectively, the derived stability criterion is no longer valid. In order to avoid numerical instabilities for the FDTD method in such modified schemes, the timestep Δt derived by the CFL criterion must be reduced further.

Contrary to boundary methods, the FDTD scheme requires the application of Absorbing Boundaries (AB) to spatially limit the computational domain. Common differential equations do not allow the determination of the tangential field components located at the domain boundaries, since this would require field information from outside the existing FDTD grid. A number of methods, the so-called Absorbing Boundary Conditions (ABC), have been proposed to reduce reflections from the computational boundaries of the FDTD grid. In general, ABCs are essentially based on two principles: conditions imitating an absorbing material or conditions based on plane wave solutions to the wave equation. Within these methods, the tangential electric field components must be calculated to absorb the incident wave as effectively as possible.