SPEAG Executive Board congratulates Niels Kuster, SPEAG Co-Founder and President of the Board of Directors, on receiving the distinguished d'Arsonval Award, the highest scientific honor of the Bioelectromagnetics Society. SPEAG wishes him and the IT'IS Foundation continued success and many more research breakthroughs as they launch their new research initiative on personalized medicine, IT'IS for Health. At its meeting yesterday, the Board decided to honor Niels' commitment and leadership with a
CHF 200'000 donation from SPEAG to kick-off the new research initiative at IT'IS. His d'Arsonval Award was cited as follows:

whose creativity and accomplishments in bioelectromagnetics have expanded scientific knowledge;
whose exceptional innovations have advanced biomedical science, medical therapy, and mobile communications;
whose energy, vision and wisdom as engineer, scientist, entrepreneur, and leader enrich society and inspire colleagues and students;
and who opened a portal to revolutionary models for the transfer of electromagnetic energy to vital tissues.

Global travel has made the “Man in Black” a tireless bearer of excellence in thought, deeds, and taste, a standard for scientific truth, and a smiling face recognized universally among a global family of friends—which is not to overlook the multitudinous voxels of his Virtual Family. With delight in recognizing his many enduring accomplishments, his energies dedicated to the Society’s journal, board, and as its President, and his high standing among colleagues, we, assembled in Brisbane, Australia for the Thirty-fourth Annual Meeting of the Society, proudly confer this Highest Honor in bioelectromagnetics this day, the nineteenth of June in the year two-thousand-twelve. 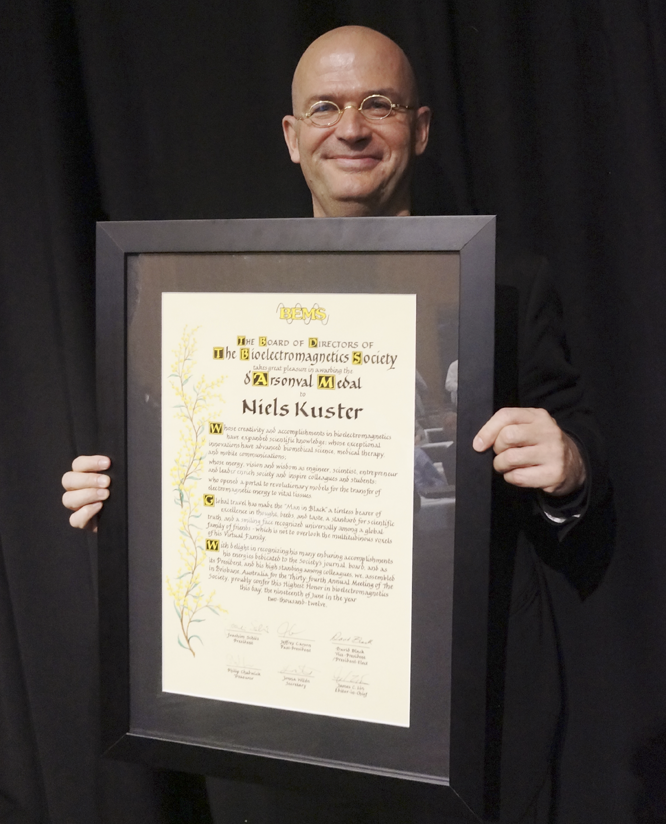