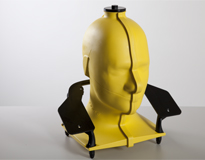 Beyhan Kochali was born in Pleven, Bulgaria on 24th June 1981 and holds Bulgarian and Swedish nationalities. He received his Bachelor of Science diploma in Radio Communication Technology from the Technical University, Sofia, Bulgaria in July 2003.

Parallel to this, he attended a two-year course in Advanced Microwave Engineering hosted by the Sofia University St. Kliment Ohridsky. In August 2003, he moved to Sweden and joined the masters program in Wireless Systems  in the Royal Institute of Technology (KTH) in Stockholm. At the end of 2004, he joined Allgon Mobile Communications in Åkersberga, Sweden as an RF measurement engineer. He received his Master of Science diploma from KTH in March 2006. From 2007 to 2012, Beyhan was an engineering manager in the Antenna department of Allgon Mobile Communications/ Centurion Wireless/ Laird Technologies, where he led advancements in the field of antenna measurement and testing of mobile devices. In this capacity, he was responsible for building and supporting a state-of-the-art test facility, including several 3D-spherical near-field test ranges, a SAR lab, and a general electromagnetic test facility. An important part of his duties was aligning the measurement capacities and capabilities of several R&D sites in Korea, China, Sweden, and the USA. He next held a senior R&D position in Nokia Mobile Phones, Germany. Beyhan is now part of SPEAG´s R&D team, where his main focus is miniature electro-optical sensor technology and its application to EMC testing.

His main interests include modern communication systems, advanced measurement techniques, and antenna design. Beyhan has been a co-author of several conference papers.